EQUAL OPPORTUNITY POLICY & PROCEDURES
Fighting Words Northern Ireland (hereafter Fighting Words NI or FWNI) is committed to the promotion of equality of opportunity for all staff, artists, freelancers and volunteers. Fighting Words NI will ensure the provision of equality of opportunity and fair participation of children and young people, their parents and carers.
Fighting Words NI will provide equality to all, irrespective of gender (including gender reassignment), marital or civil partnership status, having or not having dependents, religious belief or political opinion, race (including colour, nationality, ethnic or national origins, being an Irish Traveller), disability, sexual orientation or age.

PRINCIPLES
Fighting Words NI:
•    is opposed to all forms of unlawful and unfair discrimination. All job applicants, employees and others who work or volunteer for the organisation will be treated fairly and will not be discriminated against on any of the above grounds. Decisions about recruitment and selection, promotion, training or any other benefit will be made objectively and without unlawful discrimination.
•    recognises that the provision of equal opportunities in the workplace is not only good management practice, it also makes sound business sense. Its equality policy will help all those who work for us to develop their full potential and the talents and resources of the workforce will be utilised fully to maximise the efficiency of the organisation.
•    is committed to inclusion and social justice. Education should provide equal opportunity for all young people, regardless of social background. For this reason we are committed to promoting our work particularly in schools and contexts that will contribute to more equitable outcomes.

•    inform and guide both staff, artists, frelancers and volunteers involved in projects and programmes run by Fighting Words NI. It ensures that appropriate procedures are put in place to ensure equality of opportunity for all.

The policies of Fighting Words NI are established and overseen by the Board of Directors, which delegates responsibility for implementation to the executive staff and, through line management, to other staff, artists, freelancers and volunteers. No policy within the organisation operates in isolation and as such, other policies (Safeguarding, Health & Safety, and Volunteering) will influence the procedures addressed through this policy. Fighting Words NI’s staff, artists and volunteers accept and recognise their responsibilities in relation to the appropriate regulations and legislation. Fighting Words NI will endeavour to carry out its responsibilities by:

•    Promoting equality of opportunity for all persons
•    Promoting a good and harmonious working environment in which all persons are treated with respect
•    Preventing occurrences of unlawful direct discrimination, indirect discrimination, harassment and victimisation
•    Fulfilling all its legal obligations under the equality legislation and associated codes of practice
•    Complying with its own equality policy and associated policies
•    Taking lawful affirmative or positive action, where appropriate
•    Regarding all breaches of equality policy as misconduct which could lead to disciplinary proceedings.

Fighting Words NI is committed to a review of its policy and procedures by the Board of Directors at regular intervals, with reference to changes in practice and legislation.

EQUALITY PROCEDURES
Fighting Words NI has agreed procedures for the implementation of all its policies. It has also established roles and responsibilities to ensure the policy is upheld.
The procedures are detailed in the following sections:
1.    Implementation
2.    Definitions
3.    Communicating the Policy
4.    Procedures & Complaints
5.    Management, Monitoring, Review & Reporting
6.    Appendix: Public Equality Policy Statement
Final responsibility rests with the Board of Trustees, which delegates authority to staff as follows: 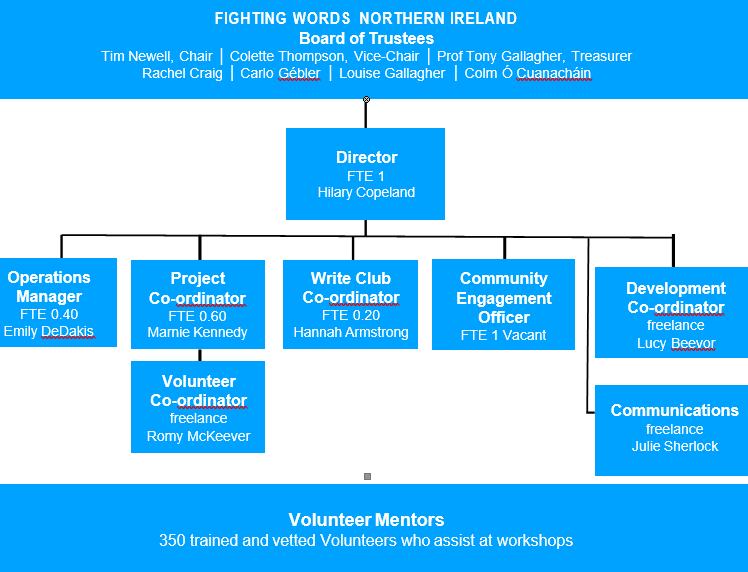 1.    IMPLEMENTATION
Fighting Words NI will offer clear instruction on responsibilities and practice, based on its policy and procedures. The Operations Manager has specific responsibility for the effective implementation of this policy. Fighting Words NI will expect all staff, freelancers, artists and volunteers to abide by the policy and help create the equality environment which is its objective.
In order to implement this policy Fighting Words NI will:
•    Communicate the policy to employees, job applicants, freelance staff, artists and volunteers
•    Require staff, artists and volunteers to agree to uphold its policy and procedures prior to work
•    Incorporate specific and appropriate duties in respect of implementing the equality policy into job descriptions and work objectives of all staff
•    Provide its staff, artists, freelancers and volunteers with guidance and training specific to the role they will undertake
•    Ensure that those who are involved in assessing candidates for recruitment or promotion are aware of non-discriminatory selection techniques
•    Incorporate equal opportunities notices into general communications practices, as appropriate
•    Obtain commitments from other persons or organisations such as subcontractors or agencies that they too will comply with the policy in their dealings with the organisation, its workforce and volunteers
•    Ensure that adequate resources are made available to fulfill the objectives of the policy.

Alleged contravention of the relevant legislation
with regards to less favourable treatment does not amount to victimisation if the person concerned made a complaint that was false and was not made in good faith.
2.3    Positive Action
Relevant legislation within the UK provides for, among other things,positive action measures. This holds where members of a particular gender, racial or religious group have been under-represented over the previous 12 months in particular work. Where appropriate, lawful positive action measures such as special encouragement in advertisements or special training will be developed. These measures will be available in certain circumstances, for example where there is an under-representation of audience members or volunteers.

3.    COMMUNICATING THE POLICY
Fighting Words NI will communicate its policy practically, publicly and  in the promotion of good practice.

3.1    Practical Communication
Fighting Words NI will draw attention to its policy on its webpages. It will make the public aware of its principles and procedures. Where appropriate, it will provide supplementary information for distribution to parents and carers who attend Fighting Words NI events. Host organisations such as venues will be notified of the policy and where appropriate will be provided with notices for display and other relevant literature. The contact details of the Operations Manager (the Equality Officer) will be supplied to relevant external companies, staff, artists, etc.
3.2    Public Communication
Fighting Words NI will make information on its policy and procedures available through its webpages via a public policy statement (see Appendix). Where appropriate, it will carry literature relating to its policy for distribution to members of the public. It will also be open to enquiries, concerns and complaints about issues relating to equality. Staff at events and projects will carry copies of relevant policy documents and literature with them and pro forma report forms should they be required. All literature will detail the contact information of the Equality Officer.
3.3    Promotion of Good Practice
Fighting Words NI will stipulate that other organisations it is affiliated with have Equality policies in place and are implementing those policies. Through induction, training and the provision of written information on issues relating to Equality, Fighting Words NI will instill good practice in its permanent and freelance staff, artists and volunteers.

4.    PROCEDURES & COMPLAINTS
Should any member of staff, volunteer or artist feel they have suffered  any form of discrimination, harassment or victimisation the following Grievance procedures must be followed.
In all cases:

•    Records will be supplied for any further investigation to relevant authorities

•    Employees and volunteers will be supported in any subsequent investigation even after their contract of employment or involvement with the
organisation has ended.

•    Fighting Words NI's Board of Directors will be notified once this grievance has been made with an additional follow-up on the report findings.

•    All complaints will be recorded accurately and confidentially. This will include what happened, when and where it occurred, and who was
present

•    Records will be supplied for any further investigation to relevant authorities

•    Employees and volunteers will be supported in any subsequent investigation even after their contract of employment or involvement with the
organisation has ended.

•    Fighting Words NI's Chairperson will notify all the Board of Trustees once this grievance has been made with an additional follow-up on the report
findings.

In addition to its internal procedures, staff, volunteers and users have the right to pursue complaints of discrimination to an industrial tribunal or the Fair Employment Tribunal under the following anti- discrimination legislation:

•    Employment Equality (Age) Regulations (Northern Ireland) 2006
•    Equal Pay Act (Northern Ireland) 1970, as amended.
Every effort will be made to ensure that anyone who makes a complaint will not be victimised. Any complaint of victimisation will be dealt with seriously, promptly and confidentially. Victimisation will result in disciplinary action and may warrant dismissal.

5.    MANAGEMENT, MONITORING, REVIEW & REPORTING
Fighting Words NI is committed to managing the implementation of this policy and procedure in full and ensuring that it is reviewed regularly and amended as necessary. The Board and management undertake this to ensure unlawful and unfair discrimination does not occur within the organisation and that the rights of staff, employees and volunteers to be protected is upheld.
5.1    Responsibility for Management

•    monitor its recruitment, selection and vetting procedures to ensure potential candidates are compliant with the requirements of this
policy.

•    record Induction and training for all staff and with each new intake of project-based staff. Fighting Words NI will keep a record of those
employees who return for subsequent contracts and provide references as appropriate.

•    keep detailed and accurate records of any reported incidents, allegations or concerns and comply with all requirements to supply
information as appropriate.

•    keep a record of comments and suggestions for improvements that can be made to its procedures and its communication of policy, from
employees, individuals and host schools/organisations.

•    be proactive in gathering information on changes in law and practice and disseminate these/review procedures as appropriate.

•    retain all relevant records and will hold confidentiality as a primary consideration.

5.3    Review & Reporting
Fighting Words NI will review its policy regularly alongside other company policies. This will be undertaken at Board level with a report compiled and delivered by the Operations Manager. The review will take into consideration:

•    Any issues that have arisen in the implementation of the policy

•    Any incidents reported and their implications for changes to be made
•    Comments and suggestions from any source
•    Changes in legal responsibility or recommended practice
•    Issues arising from outside the sphere of equality (e.g. changes in other legislation).

Any amendments required to policy and procedures will be discussed  and approved at a Board meeting.

6.    APPENDIX: PUBLIC EQUALITY POLICY STATEMENT
Fighting Words NI is committed to the promotion of equality of opportunity in Fighting Words NI for all staff, freelancers, artists and volunteers. Fighting Words NI will ensure the provision of equality of opportunity and fair participation of children and young people, their parents and carers.
It will provide equality to all, irrespective of gender (including gender reassignment), marital or civil partnership status, having or not having dependents, religious belief or political opinion, race (including colour, nationality, ethnic or national origins, being an Irish Traveller), disability, sexual orientation or age.
Fighting Words NI has a written policy and procedures that is regularly reviewed and legally compliant. If you require further information about Fighting Words NI’s Equality Policy and Procedures or have a concern to report, please contact the Equality Officer, Emily DeDakis, on 02890991038 or emily@fightingwords.co.uk.

Policy adopted by Board in October 2018; to be reviewed next before October 2021